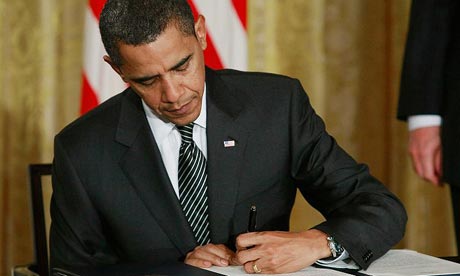 (The original of this post appeared on Alberto’s Blog)

On 18 January 2011, the US President signed a long-awaited Executive Order supplementing EO 12866. A first look at the document does not seem to show any revolutionary change in the way in which US regulation is developed.

One of the first actions taken by newly-elected President Obama two years ago was to prepare a regulatory review memorandum directing the OMB, in consultation with the regulatory agencies, to produce a set of recommendations for a new Executive Order.

On 18 January 2011 President Obama signed a long-awaited Executive Order supplementing Executive Order 12866 outlining his regulatory strategy. In essence, this supplement to Executive Order confirms “the principles, structures, and definitions governing contemporary regulatory review that were established in Executive Order 12866 of September 30, 1993” that was signed by Bill Clinton. Yet, in line with the original 2009 memorandum, it adapts E.O. 12866 to the most recent findings of regulation and behavioral science research thus laying the foundations for a 21st-Century Regulatory System.

Along with requiring agencies to take stock of existing regulations, the executive order lay out a set of principles for future rulemakings.

In particular, 18 January 2011’s Executive Order Section 1 details the following general principles of regulation: “Our regulatory system must protect public health, welfare, safety, and our environment while promoting economic growth, innovation, competitiveness, and job creation. It must be based on the best available science. It must allow for public participation and an open exchange of ideas. It must promote predictability and reduce uncertainty. It must identify and use the best, most innovative, and least burdensome tools for achieving regulatory ends. It must take into account benefits and costs, both quantitative and qualitative. It must ensure that regulations are accessible, consistent, written in plain language, and easy to understand. It must measure, and seek to improve, the actual results of regulatory requirements”.

Interestingly enough, the same section after having confirmed that in applying these principles each agency is directed to use the best available techniques to quantify anticipated present and future benefits and costs as accurately as possible, it adds that “Where appropriate and permitted by law, each agency may consider (and discuss qualitatively) values that are difficult or impossible to quantify, including equity, human dignity, fairness, and distributive impacts”.

This sounds very familiar to those acquainted with the writings of an author such as a Cass Sunstein (currently – surprise surprise – Obama regulatory ‘tsar’ and conceivably ghost writer of this EO), who has recently developed the notion of ‘Humanized Cost-Benefit Analysis’. Stay tuned: the next issue of the European Journal of Risk Regulation will host an article by Sunstein titled “Humanizing Cost-benefit Analysis”. No wonder therefore that one of the major regulatory reforms introduced by this E.O. will consist in an increased use of behavioral and psychological theories in crafting regulations. 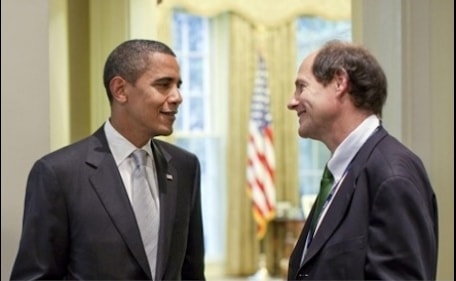 Yet the most discernible Sunstein’s input into today’s E.O. can be found in section 4, titled , oops : « Flexible Approaches ». Under this section, « Where relevant, feasible, and consistent with regulatory objectives, and to the extent permitted by law, each agency shall identify and consider regulatory approaches that reduce burdens and maintain flexibility and freedom of choice for the public. These approaches include warnings, appropriate default rules, and disclosure requirements as well as provision of information to the public in a form that is clear and intelligible ».

Libertarian paternalism is not an oxymoron because… it has made its way into the lawbooks! Yet – as you may remember – this happy event was not forecasted in Richard Thaler and Cass Sunstein’s “Nudge: Improving Decisions About Health, Wealth, and Happiness.” This is probably the most notable element of novelty within this E.O.

To sum up, in this Executive Order, the President requires Federal agencies to design cost-effective, evidence-based regulations that are compatible with economic growth, job creation, and competitiveness. To this purpose, it outlines the following guiding principles:
• Cost-effective and Cost-Justified: Consistent with law, Agencies must consider costs and benefits and choose the least burdensome path.
• Transparent/Public participation: The regulatory process must be transparent and include public participation, with an opportunity for the public to comment.
• Coordinated and Simplified: Agencies must attempt to coordinate, simplify, and harmonize regulations to reduce costs and promote certainty for businesses and the public.
• Flexible: Agencies must consider approaches that maintain freedom of choice and flexibility, including disclosure of relevant information to the public.
• Science-driven: Regulations must be guided by objective scientific evidence. “Scientific Integrity” (March 9, 2009), and its implementing guidance, each agency shall ensure the objectivity of any scientific and technological information and processes used to support the agency’s regulatory actions.
• Retrospective Analyses of Existing Rules : ex post review should be carried out systematically.
• Necessary and Up-to-Date: Existing regulations must be reviewed to determine that they are still necessary and crafted effectively to solve current problems. If they are outdated, they must be changed or repealed.

President Obama illustrated his new approach to regulation in an op-ed in today’s Wall Street Journal: Toward a 21st-Century Regulatory System. Besides illustrating the overall philosophy of his regulatory reform, he cited EPA’s recent decision to loosen rules for saccharin — an artificial sweetener that is considered safe by the Food and Drug Administration and is widely used in chewing gum and diet soft drinks. “If it goes in your coffee, it is not hazardous waste,” Obama wrote.

Furthermore, as part of the immediate implementation of this regulatory strategy, President Obama also issued a memorandum to the heads of Executive Agencies and Departments calling for more transparency and accountability in regulatory compliance, as well as a memorandum emphasizing the need to reduce burdens on small businesses whenever possible.

The emphasis on more ‘qualitative’ evaluation certainly makes the US model more aware of the inherent limits of CBA, especially when Obama’s EO mandates the agencies to consider to take into account not only ‘equity’ (already added by Clinton in its EO 12866) but also “human dignity” and “fairness”. How to reconcile this shift towards more ‘qualitative’ analysis with BCA seems the challenge that all agencies and OIRA will now face. In so doing, they will act under the scrutiny of both Courts and the President.

The Special Symposium hosted by the next issue of the European Journal of Risk Regulation will try to address these questions. Issue 1/2011 of EJRR is expected by mid-February.

PS: For an insightful overview of the US regulatory oversight experience see here