Cheaper US Goods & Services for Europeans? It may finally happen. 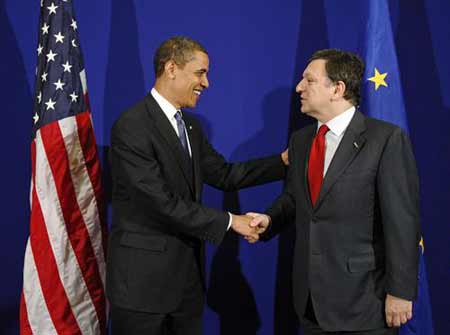 Are you the owner of a medium-sized European company that exports to the US? Do you work at the European unit of an American multinational firm that has significant investments in the EU? Or, more generally, do you buy goods and services based on their quality, regardless of where they come from? In all of these cases, among many others, a free trade agreement (FTA) between the EU and the US would be to your benefit.

Talks on the FTA between the two economic powerhouses will start in June 2013 and, according to an optimistic scenario, could end by the end of 2014. However, some more pessimistic analysts warn that the negotiations could take much longer, at least two or three years, due to their complexity as well as a number of thorny issues. Once the parties manage to hammer out the deal, the world’s two largest economic blocs – which account for 26% and 35% of the world trade of goods and services, respectively – would abolish all tariffs and quotas in their trade relations. Currently, the tariff is about 3–4%, the elimination of which would boost GDP by an annual 0.5% in Europe and 0.4% in the US, according to the European Commission estimates. Despite the seemingly the low percentages, these figures are huge: several billion euro (and USD) per year of added value.

All we need is growth

The effort to dismantle the trade barriers between the world’s two biggest consumer markets – 500 million customers in the EU and 315 million in the US – is well-regarded among businesspeople across the Atlantic. With the FTA to be implemented in the foreseeable future, the second Obama administration is keen to attract the support of business circles that have so far been suspicious of the president’s economic endeavours. The FTA would mean more jobs, more investments and more growth – all of which are badly needed, both in the United States and Europe.

The agreement would also encompass easing and approaching to each other investment conditions on both sides of the Atlantic. Total bilateral investment today is estimated to be around USD 4 trillion. Cutting only half of today’s non-tariff barriers, for example such as the safety standards of cars (regulatory “burden” requiring carmakers to comply with EU or US safety rules) could boost GDP in both blocs by 3%, according to The Economist, the British weekly.

The talks on a number of issues however are not expected to be cakewalk. The US, as the world’s biggest agricultural exporter, feels deeply disadvantaged at not being able to access the European market with its products due to the erected tariffs and quotas, as well as health standards that are stricter than in the US (think of sugar levels, food labelling and other topics).

Only 1–2% of the country’s agricultural trade finds its way onto the EU market. It will be particularly difficult to agree on the issue of exporting genetically modified organisms (GMOs) from the US to the EU, as Europeans have long been suspicious of the health effects of these products and have taken a stance on protecting their population from unforeseeable diseases. The US perceives the requirement to meet such strict health rules as pure market protectionism. But the EU refrains from “negotiating down” these standards of healthcare and environment. Another contentious issue is the complaints of European firms about not being able to take part in public procurement tenders in the US. Regulations overseas are set by the individual states, and the processes are generally not as open as in Europe.

As far as the EU is concerned, the decision makers should pay attention that the advantages of the FTA should spread evenly among the member states. If that does not happen, the euro zone countries may face another wave of divergence in terms of their foreign trade balance and, consequently, current account deficit that would eventually threaten the euro area already fragile stability.

Should all of these questions with the US be resolved, the EU – which actually has 29 FTAs in effect and several more under negotiation, including ones with some regional blocs in Central America, Latin America (Mercosur) and Asia (ASEAN) – would be racking up not just another in a long list of agreements, but one that would be the most important in history.

So will there be more Europe in the US, and more America in Europe? A positive outcome will likely be a good deal, a win-win for people on both sides of the Atlantic, and will also make both blocs more competitive with the rest of the world. So let’s have more Roquefort cheese and European wine in the US, and more e-commerce and overseas IT-products in Europe!